For 50 years, the Turkey Trot races have been a local Thanksgiving tradition. On the Saturday before Thanksgiving thousands have toed the line over the years in a spirit of comraderie and competition. It was no different this year, on the event’s golden anniversary.

Two Creek Road Runners doubled their pleasure, running both the 10K and the 5K, and taking age-group honors in so doing.

Repetti and CRR Bruce Hubbard and CRR April Anderson were each quoted in the Newark Post story about the event.

Hubbard and Anderson, both in their upper 70s, walked the 5K course, continuing their own tradition of participation in this local moving celebration. Hubbard placed 3rd among the 75-79s, and had there been a parallel division for women in the 5K, the 78-year-old Anderson would have won. As it was, she finished 4th in the 70+ women’s division.

We’re transitioning from winter into spring once again, and there have been a few notable racing achievements this month.

On March 13, at the 21st annual Logan House 5K in Wilmington, CRR Bruce Weber was one of several competitive senior runners to finish well up in the overall results. Weber finished 5th overall and 2nd among the 60-64s in 20:18. Among the 60-year-olds, there were four runners in the top 12 of the race, all under 7-min./mile pace. Looks like this is perhaps the strongest 10-year age group of all the northern Delaware–area men runners.

On March 19 in Virginia Beach, 77-year-old CRR April Anderson completed the Yeungling Shamrock 5K in 1:05:28, placing 3rd among 18 participants in the 75-79 age group in this, the 50th anniversary of the Shamrock Marathon Weekend of racing, a mega-event on the East Coast. She also placed 3rd among her age-group peers in the March 20 local Fusion Run for the Buds 5K.

And much like the Eveready Energizer bunny, CRR Doug Repetti just keeps going and going. In the same race, the septuagenarian won the 70-and-over age group with a time of 1:59:53, placing him 131st overall out of 331 competitors and 55th among the 103 men’s masters.

Now, on to warmer weather.

There were several notable finishers among the Creek Road Runners who ran the Fusion 5 Miler here in Newark on July 31.

CRR Andrew Weber turned in another impressive performance, winning the men’s masters division and finishing 3rd overall in a neat 30:00. Six minutes per mile at age 41 is nothing short of outstanding.

CRR Doug Repetti continues to run well among the 70-and-overs, winning this über-seniors category in 41:55 and finishing in a very respectable 57th out of the 186 competitors.

Well done, all of you.

CCR April Anderson and her husband, CCR Bruce Hubbard, ran the Gasparilla Distance Classic 5K on February 22. Anderson wanted to try out the competition in her new age group (75-79) and got second out of 32 women, which, because she finished within the top 10 percent of her class, netted her a mug and a doubloon award. There were more than 10,600 participants in the 5K. Anderson’s time was 37:41 (37:01 chip).

She was aiming for something in the upper 35- or at least 36-minute range, but it was too crowded, especially at the beginning. Anderson reported that there were five corrals but (as is often the case) many of the runners did not go into the correct corral for their average speed and just stopped and walked in front of her, congesting the way and slowing her down. Hubbard’s finishing time was 42:57 (42:33 chip), slowed a bit by the same issue.

Anderson says, “I hope I can report a placing in the Shamrock Sports Fest in Virginia Beach. I bought a cool medal hanger with a picture of a long, rural road that says ‘There will be a day when I can no longer do this. Today is NOT that day.’ But, at 75, who knows!”

Escaping the “winter” in Delaware to head to sunny Florida for a weekend? Sign me up! The Gasparilla Distance Classic is a weekend filled with four races—5K and15K on Saturday and Half Marathon and 8K on Sunday. Runners can opt for challenges by signing up for combos of the races. I just did the half. 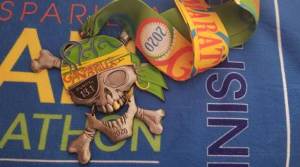 While not part of the Gasparilla pirate festival in Tampa, this race keeps with the pirate theme and has an awesome medal (don’t judge, but I only do races with good medals)!

The run is very well organized, and the course is pancake flat with views of Hillsborough Bay along Bayshore Boulevard for 80 percent of the course. With the half marathon capped at 6,500 runners, the course never felt crowded. It was my first time doing the race, and I will definitely do it again and maybe try one of the challenges next year.

The weather was perfect for running—51 degrees at the start with very low humidity. My chip time was 2:37:22 [2:42:41 gun], which I’m happy with, considering (1) the amount of training I put in (not extensive), (2) the stops along the course to take photos (including one with Chewbacca), and (3) just generally taking my time to enjoy the course and the views. Got a shout out from the finish-line announcer who corrected his pronunciation of Newark to “New-ark” as I was crossing the line.

Runners are allowed to hang out in the Convention Center before the short walk to the start line, so that means a real restroom, a place to top off the phone battery, and a comfortable place to get some pre-race stretching done.

Can’t guarantee the perfect weather for next year, but if you want a super flat, fast course and to escape Delaware for a few days (maybe next year will be snowy?), this is a great race to do.

The granddaddy of Newark road racing, the annual Turkey Trot 10K and 5K were contested on Saturday. There were five award winners among the Creek Road Runners.

In the 5K, the honors go to two 70-and-over seniors, who each won this ever-thinning division. CRR Doug Ridge won in 28:28, and CRR April Anderson won in 42:12 (no doubt walking much of it).

The fastest time among CRRs in the 5K belonged to CRR Doug Repetti, who ran a 27:05, taking second place among the 65-69s.

A well-deserved Thanksgiving meal goes to you five.

Creek Road Runners is an informal association of runners/joggers who frequent the only quiet scenic road out of Newark, Delaware.
Join 46 other followers