Apparently to no avail, Mark Deshon explains a critical turn on the course.

The powerful El Niño that is in play this winter in the U.S. made this—the 17th annual “Wring Out the Old, Ring in the New”—trail run at Fair Hill Natural Resources Management Area one of the most comfortable, if not the most, in the history of the event, weather-wise. Despite two days of rain leading up to today, the course was not nearly as muddy as it could have been.

For the third consecutive year, the event attendance record was broken. With the addition of 11 “newbies,” a record 25 people (and one eager canine) came out to run/jog/walk all or part the loop course.

Of course, there was a bit of a hiccup. Self-appointed Creek Road Runners CEO CRR Matt Robinson made it for the second year in a row and inadvertently took CRR Paul Amer on an unintended shortcut. Matt had forgotten that he had run the same shortcut with his son last year and didn’t correct for the fact that Paul was unfamiliar with the course. They did manage to add on some mileage by running out and back on the end of the actual course, though. As Paul would say, “C’est la vie.” 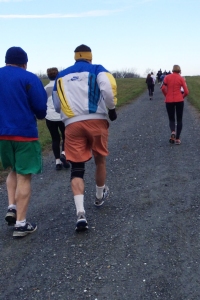 Runners start spreading out up the first incline.

CRR Steve Tague biked to the parking lot from home. He and CRR Mark Deshon ran together and pulled away early from the rest of the field of runners, which quickly spread out along the plateau in the initial mile. Steve eventually pulled ahead of Mark in the last quarter mile. Of course, Mark’s excuse was that Steve was already well warmed up because of his bike ride. But give him plenty of credit for being so eco-friendly. 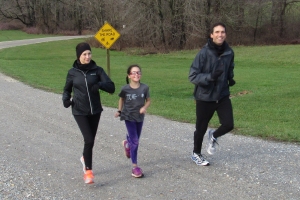 There were five multi-generational pairings or groups present, so the event had a real “family feel.” CRR Dave Schultz and CRR Christine Schultz not only brought their son, Ben, but their dog, Dakota. Dave, Ben, and Dakota took the short route, as did CRR Mike Shay, running with wife, Amy, and daughter, Molly. CRR Dave Edwards and son, Owen, ran the entire loop. CRR Sue Barton came with daughter, Emily, who ran ahead of her mom. CRR Bill Rose ran the loop with his daughter, Allison. 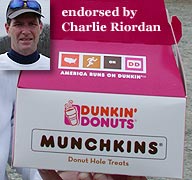 Judy DiIorio won the “newbie” random giveaway at the end of the event; as CRR Charlie Riordan drew her name and presented her with a gift card for Dunkin’ Donuts (official “sponsor” of the event—Charlie still runs on Dunkin’).

Like Loading...
Creek Road Runners is an informal association of runners/joggers who frequent the only quiet scenic road out of Newark, Delaware.