There may be more out there who completed this year’s Marine Corps Marathon in Washington, D.C., but two Creek Road Runners stood out, each completing the 26.2-mile course in under 200 minutes.

In a race around the monuments of our nation’s capital, these two were monumental themselves.

Leading the way was CRR Bruce Weber, UD’s dean of the Alfred Lerner College of Business & Economics. Weber was all by himself in second place overall, not close to the leader but way ahead of anyone else, posting a 19:39 along the Creek Road course. In doing so, Weber was also the top master’s runner. 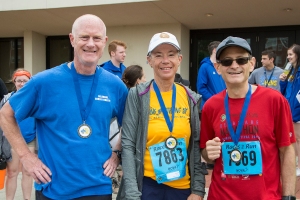 Age-group winners Deshon, Anderson, and Weile are happy with the results (photo by Doug Baker, courtesy of UD).

Three others came away with age-group wins. CRR Dan Weile has been running well lately, and he placed 5th overall on the day, winning the 40-49 age group in 20:30. In winning the 60-69 age group, CRR Mark Deshon ran a decent 21:26, finishing 10th overall—a great way to celebrate the 40th anniversary of his UD graduation. On the distaff side, a very fit CRR April Anderson headed the 70-and-overs in 39:32.

Kids of Creek Road Runners even garnered some medals. 14-year-old Ben Schultz, son of CRR Dave Schultz and CRR Christine Schultz, took 3rd among the 13-19s and 14th overall in 22:52. Molly Shay, 12-year-old daughter of CRR Mike Shay, won the 12-and-unders with a 24:50 and was the 4th woman finisher.

Sunday was a great day for Creek Road Runners, despite the unseasonably cool temperatures and added wind. Several participated in one of the events during the weekend, which included the Delaware Marathon, Half-Marathon, 4-Person Relay, and 5K.

One Creek Road Runner—38-year-old CRR Andrew Weber—stood above all the rest (out of 699 finishers) in the Delaware Half-Marathon, winning in 1:22:34 and finishing a good five-and-a-half minutes ahead of the next runner. CRR Dan Weile punched his ticket for the podium by being the third man to finish (fifth overall) in 1:29:52. Both Weber (35-39) and Weile (45-49) would have won their respective age groups but had to settle for the bigger honor of having finished in the top three. 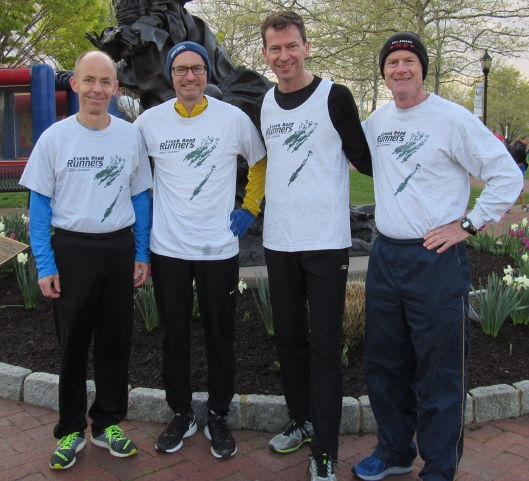 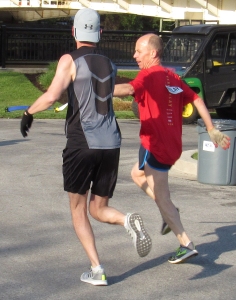 The Creek Road Runners 4-person relay team bested 49 other teams in winning the relay. With an average age of 56.5, the rather senior team of CRR Bill Rose (leadoff) CRR Bruce Weber (leg 2), CRR Mark Deshon (leg 3), and CRR Bill Farquhar (anchor) logged a combined time of 2:59:16, slower than their collective potential but well ahead of the second-place team. This is the best overall place finish of any Creek Road Runners team in the history of this race. Last year, the team placed third; the team was fifth in 2016. 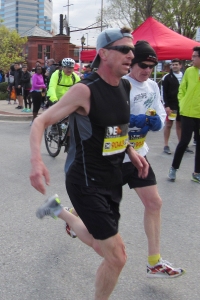 At age 59, Rose (45:03) gave the team the early lead it would not relinquish (exchanging with Weber in above photo), and the cushion that 50-year-old anchor Bill Farquhar (45:27) needed to treat this as an up-tempo training run for next week’s Broad Street Ten Miler. In between, the fastest time of the four—42:17—was turned in by the 57-year-old Weber on leg 2, and Deshon (three weeks shy of turning 62) stepped up his game to post a 46:29—18 seconds better than his relay leg in 2016 (Weber exchanging with Deshon in photo at right). 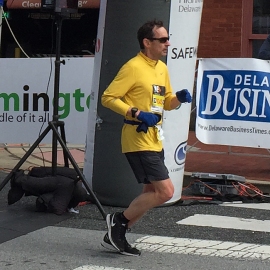 With the team squarely in the lead, each of the runners enjoyed the luxury of a lead vehicle, either a motorcycle or bicycle, to follow through the 6.55-mile relay course, something to which none of them is accustomed (Farquhar finishing in the photo at left; in photos below: Rose, Farquhar, and Deshon—holding Weber’s jacket during leg 2; Weber congratulating Farquhar after the finish). 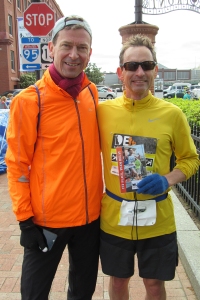 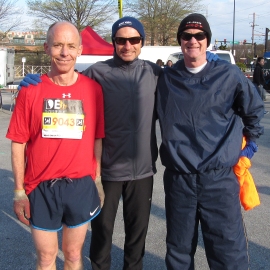 Three Creek Road Runners are notable for recent achievements, two for racing and one professionally.

In terms of professional accomplishments, University of Delaware professor and CRR Dan Weile has been named a 2018 Fellow of IEEE (Institute of Electrical and Electronics Engineers) for his work in the field of computational electromagnetics. He writes software to explain and simulate electromagnetic waves, which are patterns of interactions between charged particles.

This honor is only afforded to a tenth of a percent of IEEE’s voting membership worldwide. “To have the people who know the most about computational electromagnetics say that my work is important enough to be recognized in this way is a great honor,” Weile said.

Creek Road Runners salutes these three for their achievements!

…or the crazy. You decide. 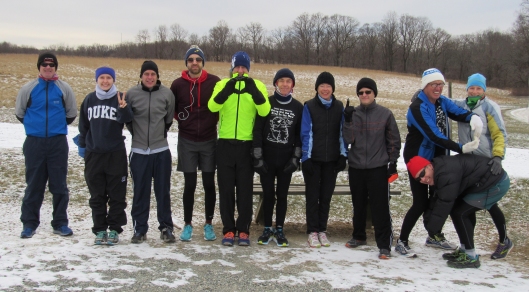