In addition to being a pretty good all-around athlete, competitive within her age group, CRR Sue Barton recently received plaudits for her professional work as a University of Delaware horticulturist.

The full story, in a recent issue of UDaily, begins:

“Sue Barton’s role at the University of Delaware is the perfect embodiment of the University’s land-grant mission. She teaches. She conducts research. And she takes UD’s knowledge to the public.”

Of course, we also know Barton for her winning qualities as a competitive triathlete and a world age-group CrossFit champion in 2019!

Kudos to you, Sue, for making such an impact within your field.

Creek Road Runners are proud to recognize one of its own, CRR Sue Barton, as a world champion!

A longtime triathlete, Barton has recently become involved in the CrossFit craze—billed as the “sport of fitness.” Competing for the team UD CrossFit, the 60-year-old Barton recently bested 635 other women worldwide in the 60-69 age group within the slightly easier “scaled” (as opposed to the “prescribed” or “Rx”) category in the CrossFit Games, held over a five-week period from October 11 to November 8 all over the world in separate CrossFit venues.

The CrossFit Games involved five events (workouts) meant to challenge one’s strength, agility, and stamina within a timed and judge-certified environment. Each workout takes place over the period of a weekend and is announced on a Thursday.

As in a cross-country meet, the lowest score combining five workout places is the winner. Barton’s total of 79 points bettered American women who placed second with 88 points and third with 99 points, respectively. She was tops in the world in the third workout, which certainly gave her a good edge on the title.

Here are Barton’s scores and world ranking among 60-69-yr.-olds in each of the five CrossFit Games competitive workouts (click to see larger view).

Barton is a professor and Extension Specialist in plant and soil sciences at the University of Delaware. 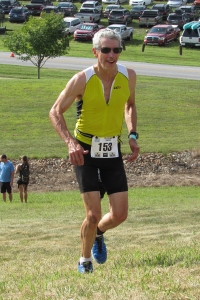 Congratulations! The three of you made us Creek Road Runners proud.

Despite below-freezing temperatures, 24 hearty souls and one ready-for-a-long-run canine came out to participate in the 16th annual “Wring Out the Old, Ring in the New” trail run at the Fair Hill Natural Resource Management Area’s Black Bridge Road parking lot on the last day of 2014.

This year was highlighted by, count ’em, 11 women—coming out in force to share this unique New Year’s Eve day experience for themselves—and a special appearance by self-appointed CEO CRR Matt Robinson. Special thanks to photographer Doug Baker, husband of CRR Diane Kukich, for taking so many good photos (sorry we only had room for a few).

At two recent races, one regional and one local, Creek Road Runners shone nearly as bright as the dimming late-autumn sun.

CRR Jay Coughenour ran the Philadelphia Half Marathon in a splendid time of 1:18:53. His chip time of 1:18:34 put him just a fraction of a second under a six-minute-per-mile pace for the 13.1-mile distance. Coughenour was the second finisher in the 45-49 age group and placed 85th the among men and 91st overall. Excellent at age 49!

In non-running-related news, rumor has it that CRR Charlie Riordan lit up the court at The Bob recently with a halftime free-throw-shooting exhibition. Now we know where he’s been training. We know “Charlie Runs on Dunkin’”; the question is Can he dunk on Dunkin’?

Creek Road Runners is an informal association of runners/joggers who frequent the only quiet scenic road out of Newark, Delaware.
Join 45 other followers