On Monday, several Creek Road Runners gathered for a fun 5K down Creek Road in honor of CRR Paul Pusecker, whose time at the University of Delaware is ending this week. Several also gathered afterward for a lunch with him at the Deer Park Tavern. 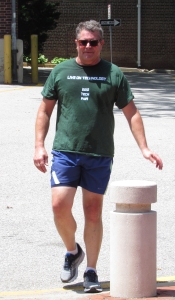 Pusecker, who has served as senior chief business officer for the University of Delaware’s College of Arts and Sciences since 2001, will join St. Mary’s College of Maryland on July 1 as the public honors college’s vice president for business and finance/chief financial officer. Before coming to UD, Pusecker retired from the U.S. Army as a lieutenant colonel after more than 20 years of active duty service.

Pusecker has been a “regular” runner out on Creek Road for the 17 years he’s been on campus, along with small group of UD running companions who had popularized the “Lower Slower” and “Chateau Country” runs that were annual staples back in the day. More recently, he’s taken up bicycling to augment his fitness regimen. He will be missed out on Creek Road.