There were several very different races this past weekend, at which some of our contingent participated.

In the Beau Biden Foundation 10K cross-country race, there were two standouts. CRR Bill Rose finished 16th overall out of 231 finishers in 50:56. This was good enough to win the 50-59 age group. CRR Theresa Cannon took a third in the same age group, finishing in 1:06:58. Ms. Cannon, who has run the Boston Marathon 13 times, was recently inducted into the Pike Creek Valley Running Club’s Hall of Fame.

Three Creek Road Runners are notable for recent achievements, two for racing and one professionally.

In terms of professional accomplishments, University of Delaware professor and CRR Dan Weile has been named a 2018 Fellow of IEEE (Institute of Electrical and Electronics Engineers) for his work in the field of computational electromagnetics. He writes software to explain and simulate electromagnetic waves, which are patterns of interactions between charged particles.

This honor is only afforded to a tenth of a percent of IEEE’s voting membership worldwide. “To have the people who know the most about computational electromagnetics say that my work is important enough to be recognized in this way is a great honor,” Weile said.

Creek Road Runners salutes these three for their achievements!

…or the crazy. You decide.

This past weekend saw several Creek Road Runners participate at various distances in local events. The notables are as follows:

In the 11th Annual Main Street Mile race in Newark, two guys with the same last name, who are related only by their fleetness of foot, cracked the top 15 in this short race of 813 participants. CRR Andrew Weber posted the fastest time among Creek Road Runners, finishing 9th overall in a lightning-fast 5:08, good for 2nd in the 30-39 age group. CRR Bruce Weber wasn’t far behind, finishing 14th overall and taking 1st among the 50-59s in 5:32. In terms of age grading, the elder Weber’s time garnered a 90.2 grade, which is considered “world class” for his age group. The younger Weber’s 84.3 is considered “national class.” Both impressive, to say the least. An honorable mention, Newark’s Deputy Mayor CRR Andrew Haines turned in a 7:15.

In a much longer race, the Pike Creek Valley Running Club’s annual Delaware Distance Classic 15K, there were four standouts. Of the 191 participants in this race, CRR Bill Farquhar came in 7th overall, finishing in 58:51 and winning the 45-49 age group. Watch out for him within the next year when he turns 50! CRR Keith Crispin took 2nd in the 50-54 age group with a 1:06:38, good for 28th overall.

In the CASA 5K, CRR Bill Rose, running in his first 5K in a year’s time, finished 4th overall out of 38 runners in 19:59. The course was entirely on the University of Delaware central campus in Newark—three laps of The Green. Nothing like a long lap!

In a slightly longer race on Sunday, Dimitri “Dima” Kaliakin, youngest son of CRR Vic Kaliakin completed his first ultramarathon, the grueling Tussey Mountain 50-miler, just outside State College, Pa. The 20-year-old Washington College grad completed the up-and-down 50-mile distance in 6:45:34, finishing 5th overall and 4th among non-masters runners. This included a total elevation gain of 5,485 feet, 1,301 feet of which occurred during one 4.1-mile stretch (from the course’s lowest to highest point). Back in May, Dima placed 12th overall out of 326 finishers in the Delaware Marathon in 3:06:07. We shorter-distance Creek Road Runners salute you, Dima!

This weekend saw the Creek Road Runners perform at their collective best during the Delaware Marathon Running Festival.

When one race just isn’t good enough (or apparently long enough), CRR Diane Kukich doubles up. She ran and won the 65-69 age group in the 5K on Saturday evening in 24:47 and then celebrated Mother’s Day by winning the same age group in the Half Marathon in 2:10:21. No doubt her daughter Christine, who also ran both races, was her inspiration, …or is it the other way around?

Of particular note was Dimitri Kaliakin (son of CRR Vic Kaliakin), who placed 12th overall out of 328 finishers in the Marathon with a wonderful 3:06:07, a pace of approximately 7:05 per mile for the 26.2-mile distance. Kaliakin placed 2nd in the 20-24 age group.

In the event where Creek Road Runners have historically shone brightly—the Marathon Relay, two CRR teams placed in the top 10 out of the 92 teams that competed.

The “Creek Road Runners” team smashed its own team record, set last year, by nearly 5 minutes, finishing 3rd overall in 2:48:26, and (by virtue of the winning team being a masters team as well) took top prize in the masters category! 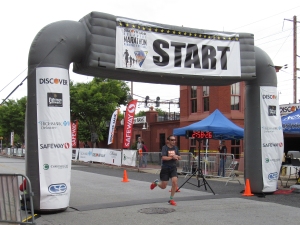