Pretty fast in his own right at age 50, University of Delaware professor and CRR Bill Farquhar has followed his kinesiology and applied physiology research into the realm of a world-class septuagenarian runner.

On April 15, Gene Dykes, at age 71, became a record-breaker in his age group at the Boston Marathon again this year, clocking an absurd 2:58:50. Back in December, he had ran an even faster marathon—2:54 and change. 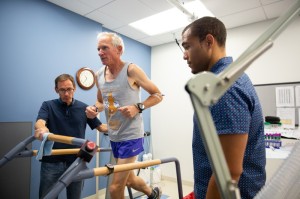 CRR Bill Farquhar (left) observes Gene Dykes pushing himself to exhaustion on the treadmill during a research session (UD photo).

Funded with grants from NIH and the American Heart Association, Farquhar and his colleagues at UD and the Mayo Clinic began physically investigating Dykes to find out how he’s managing to run this fast at his age. Their findings were recently published in the New England Journal of Medicine.

One basic assessment from treadmill sessions is that Dykes has an abnormally high VO2 max, a measure of the facility with which the body processes oxygen during exercise. “Most people get to 75, 80, 85 percent of that physiological ceiling. He seems to be chugging along 90 percent the whole way,” Farquhar said. “He is able to get closer to and hold his max. Most people get closer and fatigue.”

Farquhar now has a good personal target goal for a couple decades down the road.