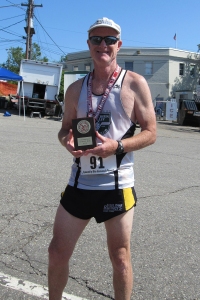 The race itself wasn’t special, even though it takes place each year in his birth city in association with Maine’s largest seafood festival, but it was the pursuit of an interesting racing trifecta that focused the attention of CRR Mark Deshon this summer.

Inevitably (like “death and taxes”), his times have slowed, but Deshon happily relishes this special—in a quirky sense—racing achievement, 21 years in the making.