Though he’s only half German, CRR Sam Parsons, son of CRR George Parsons and CRR Christina Parsons of Newark, was Germany’s gem in the 5000m race at the European Championships in Münich on August 16.

Finishing 6th out of the 25 competitors from all over Europe, Parsons, who clocked in at 13:30:38, bested his last month’s World Championship finishing time by 15 seconds. Unfortunately, as in the 5000m at the Worlds in Eugene, Ore., he couldn’t hang late with Jakob Ingebrigsten of Norway, who took the European title as well.

In the stands and cheering on his son during the evening’s race was German-born and -raised Christina, a good local runner in her own right.

This race capped a successful running season for Parsons, who trains professionally with Boulder, Colo.–based Tinman Elite. In high school he had run for The Tatnall School in Wilmington prior to a stellar collegiate running career at North Carolina State.

> See related article about Parsons at the World Championships.

CRR Sam Parsons, the Newark native who ran for The Tatnall School and North Carolina State, recently competed for Germany (his mother’s home country) in the final of the 5000m at the World Athletics Championships in Eugene, Oregon. He is the son of CRR George Parsons and CRR Christina Parsons.

Leading up to the Worlds, Parsons’s training had been good. While in California in May, he had run a 5K personal best of 13:21.17. And just two weeks prior to his trip to Eugene, he had broken his own mile best by running a 3:55.81. Back in April, Parsons thrilled hundreds of local track enthusiasts at The Tatnall School track by becoming the first ever to run a sub-4 mile on Delaware soil (see Parsons conquers Mile Challenge).

So, it seemed Parsons was ready. In past Olympic trials and at the World Championships in Doha, Qatar, he had come close to being in a final, but this was a special opportunity for him.

Fast forward to the 5000m semifinal #2. Parsons was competing for a spot in the final with the likes of the always-prominent Kenyan, Ethiopian, and Ugandan runners, as well as Norway phenom Jakob Ingebrigsten, who had just placed second in the 1,500m final. Another local runner in that same race was Charter School of Wilmington and Harvard standout Kieran Tuntivate.

Parsons ran a smart race, staying with the lead pack through most of the race. Though he lost a bit of ground in the final laps, he placed 9th in the semi with a finishing time of 13:24.5, which was good enough to qualify for the final. As he crossed the finish line, a big smile appeared on his face, as he knew instantly that he had made it.

“I’m the happiest guy in Hayward right now,” Parsons said. “Not too happy I won’t be able to go to the Wild Duck the next two nights after that; I certainly was banking on that. But final on Sunday, I think that’s a little bit better.”

Besides his parents, at least one other Creek Road Runner, CRR Dave Schultz, and his son Ben were at Hayward Field to cheer for Parsons in person.

Unfortunately, the final did not go according to plan for Parsons. He and British runner Marc Scott stayed in contact with the lead pack, but, as the race sped up in the final couple laps, both runners were seriously gapped. Parsons ended up finishing last in the final in, what was for him a disappointing, 13:45.9. Last in the final in this case, though, represents 15th best in the world!

CRR Mark Deshon recently had the opportunity to interview Parsons about his experience, and here’s what he had to say.

How would you assess your effort in the final? You looked in good shape until late in the race, when the pack pulled away from you and the Brit.

How difficult was it to gear up for a bigger race just 72 hours after having run a 13:24?

“[This was my] first time ever running two 5Ks in such a short timespan under so much stress and tension…in an arena like that. There’s nothing more motivating than getting your ass kicked at a higher level to want to figure out how to run…and be successful at that level.”

Did you and Kieran Tuntivate discuss anything before your qualifying semi? It seems he wasn’t able to keep the fast pace.

“I did see Kieran. We texted back and forth a little bit before the prelim. He was still optimistic going into the prelim. Unfortunately, he didn’t have a great day…. We talked about the field, what the race was probably going to be like, and talked tactics a little bit.”

Give us your impression of having been on the world stage in Steve Prefontaine’s signature race on his hallowed ground.

“Steve Prefontaine was my hero…. He really made running cool for me. It definitely was a full-circle moment for me. To have been watching Without Limits [the classic movie about the 1970s Oregon Olympian] before essentially every big high school race to then running on Hayward Field, where half those races in the movie were, was definitely surreal for me, and I cherished every moment there, without a doubt.”

“The atmosphere was crazy. I’d never quite run in a stadium with 50,000 people like that,…sold out, just yelling and screaming…. There was so much love. I heard ‘Sam, Sam, Sam’ so many times as I was going around the track. So, that was really special to have kind of like a pseudo–home field advantage there.”

What interesting off-track stuff did you do while in Eugene?

“I got to know [reigning Olympic 5000m champion] Joshua Cheptegei [the Ugandan who finished 9th in the final]. He lived in the same hall [as I did], and we got to drink tea together before the race…. He was very proud of me for making the 5K final…. It was really special to talk to, quite possibility, the greatest distance runner of my generation like that. That was really special, and he’s a kind, kind soul. I actually got his race bib also after the 5K final, so that will be a great memory I’ll always get to have and cherish.”

Parsons, who typically trains in Boulder, Colo., with professional club Tinman Elite, is now in St. Moritz, Switzerland, prepping for the European finals, to be held on August 16. He admitted, “It’s not quite like the White Clay Creek trails, but this’ll do just fine for the next month.”

We wish him the all the best. 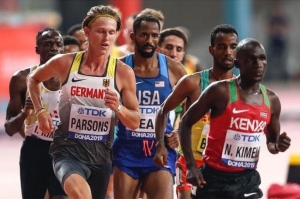 Sam Parsons competes in Doha, Qatar, among the world’s best in one of the 5,000m semifinals.

Newark, Del., native Sam Parsons, son of CRR George Parsons and CRR Christina Parsons, has had quite a running year in 2019, capped off by his competing (for Germany) in the World Track & Field Championships this past weekend in Doha, Qatar.

Competing in the 5,000m race as the German national 3,000m champion (he has dual citizenship), Parsons did not qualify for the final, but he managed to run the 24th best time (13:38.53) at this distance in the semifinals among the world’s elite middle-distance runners, finishing 13th in the second semi, just 13 seconds off of a qualifying time.

With regard to the younger Parsons’ experience at the World Championships, his father noted, “He was [just] happy to be here.” About his son’s finishing 24th overall in an attempt to qualify for the finals, the proud elder Parsons said, “I’ll take it!” 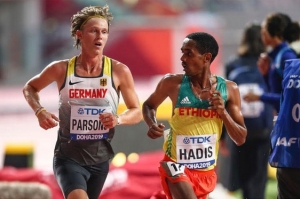 Sam Parsons makes eye contact with a rather surprised Ethiopian competitor at the World Championships in Doha.

On Sept. 8, as a run-up to his trip to Doha, Parsons ran a personal best road mile in the prestigious and nationally televised Fifth Avenue Mile in New York City. He led the professional field at the half-mile post (by a wide margin) and collected a $1,000 bonus for having done so, as he had done in 2018 in the same race. Though other runners caught and passed him later in the race, placing him 10th overall, he ran a 3:55.0, smashing his previous best by nearly three seconds and trailing the winner by less than four seconds.

Parsons’ other notable personal bests this calendar year include:

Parsons runs for the Boulder, Colo.–based Tinman Elite professional running team. Prior to a successful collegiate running career at North Carolina State, he ran cross country and track in high school locally for The Tatnall School. 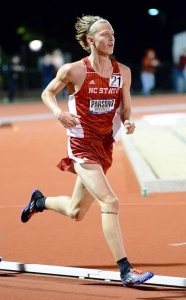 Recently turned professional Sam Parsons, Newark native and son of CRR George Parsons and CRR Christina Parsons, will be competing in the 5000m race at the USATF Championships at Drake University in Des Moines, Iowa, this weekend. You can catch the action on Sunday on NBC, the telecast beginning at 4 p.m. (EDT).

See recent News Journal article on Parsons, who ran for The Tatnall School locally and North Carolina State while in college. Parsons still holds the Delaware high school record in the 3200m.

We’re sure mom and dad are very proud!

Editor’s note: Parsons led the race with 800m to go but finished 8th in the race, a mere six seconds behind the winner.

Creek Road Runners is an informal association of runners/joggers who frequent the only quiet scenic road out of Newark, Delaware.
Join 46 other followers