Saturday was National Trails Day and a rather special day in this area. Hikers came from three states (Md., Pa., and Del.) to officially open a new trail in nearby White Clay Creek Preserve in Pennsylvania and to commemorate the 250th anniversary of the original placement of a wooden post (at the location of the stone that is called the “Tri-State Marker”) by surveyors Mason and Dixon in 1765 at the behest of William Penn to mark the northeastern corner of Maryland and its northern and (then) eastern border with Pennsylvania. 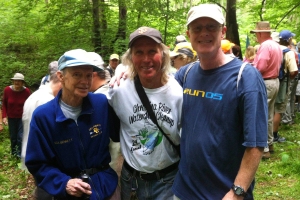 It also became an impromptu runners reunion for CRR Bob Bennett (left) and CRR Mark Deshon (right), who had hiked together, and old friend and racing nemesis CRR Steve Cottrell (center), whom they met at the ceremony for the Tri-State Marker.

Cottrell, who was there with his border collie, says he no longer races but does still run. He looked to be in good shape. Deshon had not seen him for nearly 25 years, and for Bennett it may have been longer.

Steve also asked if CRR Bob Taggart was still around and said, “Ask him about our trip back from [the] Boston [Marathon back in the late 80s].” Apparently it was quite an adventure, one which also included CRR Martin Wolfer. 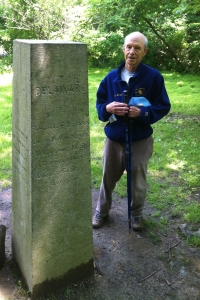 On the way back, Bennett and Deshon stopped off for a photo at the Arc Corner Monument in White Clay Creek State Park, just about a kilometer due east of the Tri-State Marker, where the westernmost point of the unique radial-line border of Delaware and Pennsylvania begins.

During the 80s, the two had spent many a run in White Clay Creek State Park dashing down the steep hill that finds this stone at its base.

All in all, it was a great day to celebrate longtime friendships.