Sam Parsons, a professional runner from Newark, Del., and son of CRR Christina Parsons and CRR George Parsons, won the 3,000m indoor German National Championship in Leipzig on Saturday. Parsons, who has dual citizenship because of his German-born mother, made the decision last year to compete for her homeland.

The 25-year-old Parsons and another German-American runner, Amos Bartelsmeyer, finished 1-2 and were the only competitors to break eight minutes, Parsons clocking in at 7:53.71.

In a post-race interview, an ecstatic Parsons said, “It was amazing to compete here today. This is something special for me to start for the first time at the German Championships. The people here are so much cooler than in the U.S. The audience loves athletics. Now I am looking forward to running at the European Championships, and I hope to bring home a medal for Germany.” 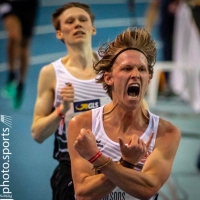 He later posted, “I wanted to win so badly. I was willing to pour out whatever was necessary to win. It’s a moment I’ll cherish forever.”

A Tatnall School and North Carolina State University graduate, Parsons will be off to represent Germany in the European Championships on March 2–3 in Glasgow, Scotland.

Will he be ready? With two Creek Road Runners forming his direct bloodline, we bet he will be. “I’m not afraid of opponents,” he declared.

Creek Road Runners is an informal association of runners/joggers who frequent the only quiet scenic road out of Newark, Delaware.
Join 47 other subscribers