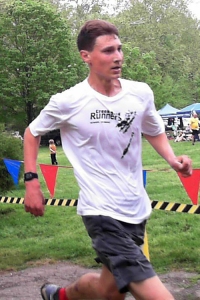 When 23-year-old CRR Dima Kaliakin races, typically a marathon is but a warm-up distance.

On Saturday, May 12, Kaliakin ran the 50km “Dirty German Endurance Fest” in Philadelphia, placing 4th overall out of 190 competitors, winning his age group in the process, in 3:52:23. That’s nearly four hours of running at a 7:28 per mile pace.

On June 2, in Staten Island, N.Y., Kaliakin competed in the Saloman OutdoorFest Ultra. The object here was to run as far—as many times over the same 5K loop—as one could in six hours! Kaliakin won this race outright, completing 39 miles (that’s a little over 12-and-a-half 5Ks) in that time and winning by more than a 5K over the second-place finisher.

Just four days later, Kaliakin entered a 24-hour charity running event in Annapolis, Md. Laps were supposed to be one mile in length. He managed to do an even 100 laps, only to find out later that the laps were each actually 0.94 miles, so he was disappointed that he had only managed 94 miles. His dad, CRR Vic Kaliakin, who is much more reasonable with his running by comparison, said that Dima “went out too fast,” completing the first 50 laps in a blistering 6:55/mile pace, having to slow up considerably after the 78th mile.

Astounding and a more than a bit crazy!

Creek Road Runners is an informal association of runners/joggers who frequent the only quiet scenic road out of Newark, Delaware.
Join 47 other subscribers