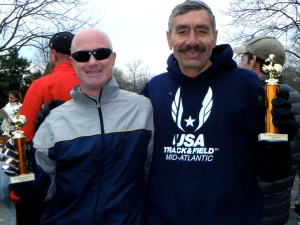 A brave few Creek Road Runners came out to celebrate the 40th running of Newark’s Turkey Trot, in both 10K and 5K options.

It was a windy morning, but that didn’t deter CRR Dan Simmons (65-69) from picking up another age-group first in the 10K by running a 43:14, crossing the line 32nd out of more than 300 participants. CRR Mark Deshon ran a solid 42:29 and was the 25th finisher to cross the line. He was actually the first finisher in his age group (55-59) but was awarded the 2nd-place trophy because the awards were determined by chip times (see editor’s note below). CRR Theresa Cannon won her age group (50-54) in 50:08.

Editor’s note: Call it “old school,” but results posted on the Creek Road Runners site are based on gun times, not chip times.