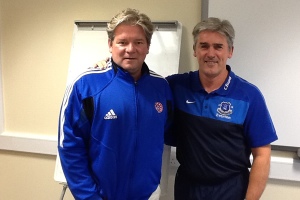 While on a site visit for the NSCAA Advanced Director of Coaching Certificate, CRR Matt Robinson (left) met with Alan Irvine, Youth Academy director of Everton Football Club. Here Irvine consoles Robinson by saying, “Sorry, lad, but your football skills are not quite what the Toffees are looking for, but you do look good in your warm-up jacket.”

A few Creek Road Runners have been on the travel circuit lately.

CRR Matt Robinson, self-proclaimed CEO of Creek Road Runners, spent some time in Great Britain trying to create bridges between our country and theirs for soccer (er, “football”) coaching.  At least we think that’s what he was up to.  Some think he was trying to get the Premier League’s Everton club over here for a group run on Creek Road.  See story.

CRR Bob Opila is nearing the end of his yearlong sabbatical, which he spent in Turkey and Australia.  When he’s finally back in Newark after a visit to his beloved Chicago, he’ll likely be refreshed and ready for a triathlon.  We suspect he had the time of his life in both countries.  He spent his final day in Australia getting in a run with ”[his] mates” in the pouring rain.  That’s dedication.

Most recently, CRR Charlie Riordan, obviously on hiatus from running Creek Road, visited with university dignitaries in Israel as part of the State of Delaware’s trade mission with that country.  The real question is whether he found any Dunkin’ Donuts while in the Middle East.  See story.