It was a banner day, both weather-wise and results-wise, on Creek Road. Seven Creek Road Runners won their respective age groups, two recorded age-group seconds, and one took an age-group third among the 321 finishers. 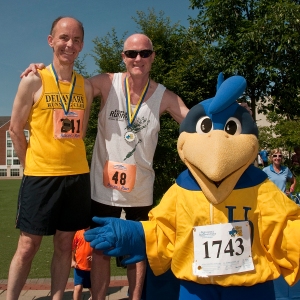 Even Creek Road Runners kids got into the act.

Aaron George, son of CRR Becky George, made it a mother-son double with a first among the 13-19s, finishing 5th overall in 19:39. CRR Christine Schultz’s daughter Lawson helped complete a mother-daughter double with a win in the 12-and-unders with a 28:38. CRR Cole Galloway’s entire clan seemed to be spread out along Creek Road, with his son Nathan taking first in the 12-and-unders with a 20:11, good for 9th place overall, and his son Nick taking a third in the 13-19s with a 22:11. Cole ran a 21:59.

Also notable was the emergence of CRR Steve Tague, who ran a comfortable 22:39 in his first race since having heart surgery two years ago.  Glad you’re back!

As always, it’s great to see CRR Jim Fischer volunteering at the finish.